“I will always choose to love you in this world and in any other life,” Harrison’s girlfriend wrote.

Harrison Wagner’s older brother and girlfriend are mourning the death of the 27-year-old, who was found dead on Monday.

Harrison — the youngest child of “General Hospital” alumni Jack Wagner and Kristina Wagner — was discovered Monday in a Los Angeles parking lot, according to a report from the Los Angeles County medical examiner-coroner, according to Us Weekly. He was pronounced dead around 5 a.m. in North Hollywood, California. 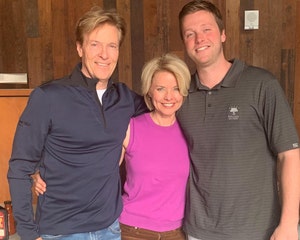 Harrison, son of Jack and Kristina Wagner from General Hospital, found dead at 27

Peter, 31, posted a series of throwback images of himself and his younger brother, as well as solo photos of Harrison, including one of him in his high school football uniform.

Sophia – who was in a relationship with Harrison “on and off” for several years – opened up about Harrison’s passing in an emotional Instagram post, revealing the pair had planned to see each other on Friday.

Alongside an adorable photo of her and Harrison, Sophia wrote, “Here’s a baby love letter. My heart is so broken.”

“We had plans this Friday and you called to apologize,” she continued. “Seven years, intermittently, alternately, we loved each other. For better or for worse. In sickness and in health.”

“Sorry I’ve missed your calls in the middle of the night for the past few days,” added, before listing the things he already misses about Harrison. “I miss sleeping in your pola bear arms, curled up. I miss sending you stupid animal videos. I miss you sending beautiful songs that brought me to tears.

Sophia – who is an actress – concluded her post with a heartfelt message.

“I was never alone in this world with you. You were the balm that soothed my soul. You were my guy. I hope I was that comfort to you. I will always be your baby, baby. I will choose always to love you in this world and in any other life. 💔💔💔💔💔💔 @harrisonwagner.”

The cause and circumstances of Harrison’s death are still unknown, as the Los Angeles County medical examiner-coroner’s file noted that the case was “deferred pending further investigation”.

On Wednesday, a spokesperson for the LA Coroner’s Office shared a statement with PEOPLE, offering more details that the cause of death should be “deferred.”

“Deferred means that after an autopsy the cause of death has not been determined and the medical examiner is requesting a further investigation into the death, including additional studies,” the spokesperson told the outlet. “Once the tests/studies come back, the doctor assesses the case again and determines the cause of death.”

Jack, 62, and Kristina, 59, have not posted or commented on Harrison’s death. The former couple married in 1993 and divorced in 2006. In addition to Harrison and Peter, Jack also has a 34-year-old daughter named Kerry from a previous relationship.

Harrison last posted to her Instagram profile on May 22. Captioning a photo of him sitting on a bench, above, he wrote, “Focus. YOU end up with YOU and your thoughts. 🤔.” Following news of his death, fans flooded the comments section, expressing their sympathy and grief.